singleplayer, multiplayer (on keyboard, not an online game)

You Don't Know Jack Volume 1 is the first instalment in the series and also the first game released by Jackbox Games (under their original name of Jellyvision). It was originally released on September 12th 1995 and is hosted by Nate Shapiro.

Jellyvision's website has this explanation as to why You Don't Know Jack was made:

"Way back in the early 90s, Jellyvision decided to test the waters of mainstream interactive entertainment by beginning a partnership with Berkeley Systems, of "Flying Toasters" fame. Berkeley Systems asked us if we could apply the concepts of a game show to an adult trivia game. Since no one at Jellyvision at the time actually liked trivia games, we tried to figure out how to make trivia questions fun and engaging to us. When we realized that it was possible to ask about both Shakespeare and Scooby-Doo in the same question, You Don't Know Jack was born."

You Don't Know Jack is a humorous trivia game for up to three players. The players take part in a quiz game, which partly parodies television shows such as Jeopardy. The players do need to answer serious questions, and knowledge of various topics (ranging from classical literature to modern pop culture) is required; however, the show's host is distinguished by his sense of sarcasm, sometimes offering humorous wordings for questions, and sardonically addressing the participants.

In 1996, a bonus Question Pack was released that would add additional questions to the game if it was already installed. Later that year, a bundle was released that contained both the base game and the additional Question Pack known as You Don't Know Jack XL. The original game would also be released in almost every compilation pack that followed, either as the base game or the expanded upon XL version.

This tabletop version of "You Don't Know Jack" was released by Tiger Electronics and operates off of four AA batteries. It offers a streamlined gameplay experience with just the basic question format (no Gibberish questions) and only 10 questions per game with values of $1,000, $2,000 or $3,000 with no Jack Attack. It features microchip speech for "wall-to-wall music, sound effects, and verbal abuse (the latter in the form of a wisecracking host)." Two to four players can play. According to the manufacturer's label, "This product contains mature content, including suggestive references and language that may not be suitable for young children."

Hosted by "Nate Shapiro" (game creator Harry Gottlieb), the game serves as a scorekeeper of dollar values won or lost. The game's hard-coded database tracks questions by code, dollar value, and correct answer. A question's five-digit code is entered using the numbered player buzzers, the question is read aloud by a player, and a sliding door reveals four multiple-choice answers. Players can still "Screw" once per game by buzzing in, hitting the large Screw on the console and hitting another player's buzzer to make them answer. The game reveals whether or not players answer correctly and adjusts scores accordingly (however, unlike the CD-ROM game, scores cannot go below $0.). High score after ten questions wins.

Includes 125 question cards with 500 total general knowledge questions. At least two expansions were released a TV Pack and a Movies Pack each adding 113 cards with 450 (TV) or 452 (Movies) additional questions in the set's given subject. (More expansion sets may have been planned, but were not released.)

There was a Japanese localization of the game which was released in 2000. Not much about this version is available. An article on GameSpot.com discusses its release. A photo of the box is available on Jellyvision's Website. What we do know is it was made with a company known as Yoshimoto Kogyo.co.Ltd. Masatoshi Hamada who was a popular comedian was the host of this version.

You Don't Know Jack is exclusively controlled via keyboard. At the start of a new game, a sign-in host named "Cookie" asks for the total number of players (one, two or three), after which each player enters their own name. Cookie then asks players to select between either a shorter seven-question tournament-style format or a full twenty-one question game. Each player is assigned their own "buzzer" key on the keyboard, allowing players to buzz-in before selecting their answers. The majority of YDKJ's questions are multiple-choice, with four possible answers selected using the number keys.

The game allows players to select from three different question categories at at time during a game's first and second rounds. In multiplayer games, the player with the most recent correct answer chooses the category for each question (except for the first question's category which is randomly assigned to a player). If none of the three categories are selected after several seconds, one will be chosen at random by the host. Once a category is chosen, the host reads its associated question, and players are given several seconds to buzz in before attempting to answer.

Answering a question correctly earns a certain amount of cash based on its relative difficulty. In Round 1, standard multiple-choice questions are worth $1,000, $2,000 or $3,000, and these amounts are doubled in Round 2 if playing a full-length game. However, answering incorrectly (or buzzing in and failing to select any answer) deducts the same amount from a player's total score, which can be decreased to negative dollar values. If a question is incorrectly answered, any players who have yet to buzz in still have the option to do so and select one of the remaining answer choices.

Once in the game, players take turns picking categories and then answering questions. Each question is worth a different amount of money: $1,000, $2,000 or $3,000. Players buzz in and then select the answer that they believe is correct (in single-player games, you only need to select an answer). Answering a question correctly will reward you with money amount on offer while getting the question wrong will cost you that amount. Additionally, there is the Gibberish Question category which starts out at $5,000, but over time becomes worth less money. Players are shown a nonsense phrase that rhymes with something well known. Players that buzz in and type in the answer that rhymes with the phrase. During Round 2 - i.e. the second half of the game - all values are doubled.

In multiplayer games, each player is given a Screw along with a chance to "Screw Your Neighbor". Buzzing in and then using the Screw allows a player to force one selected opponent to answer the current question. However, if the Screwed player answers correctly, they win cash as usual while the player who attempted to Screw them loses the same amount.

Players receive only a single Screw during short games. For full-length games, each player receives a Screw at the start of Rounds 1 and 2.

This version of YDKJ contains two special types of questions which sometimes appear instead of the standard multiple-choice variety during Rounds 1 and 2.

The final round of every game is the "Jack Attack," a word association game based on a particular theme which is provided as a clue prior to the start of the round. Players' total scores are hidden during this round.

Once the Jack Attack begins, a word, name or phrase is displayed in the center of the screen. Potential answer phrases are also shown one-at-a-time somewhere else on the screen, which quickly begin fading away before the next possible answer appears. Players can attempt to buzz in when two question and answer phrases matching the overall theme appear on-screen simultaneously; for example, if the clue is "nicknames" and the central question phrase is "New York City," then a correct match would be "Big Apple". Each successful match earns $2,000, while incorrect answers subtract the same amount per buzz-in.

The question phrases shown in the center will remain there for several seconds, slowly growing larger until either they are correctly matched with an answer phrase, or the game cycles through seven potential answers with no correct matches. There are a total of seven unique question phrases per Jack Attack, some of which may be repeated if not matched correctly on the first attempt. 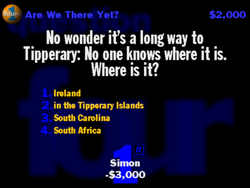 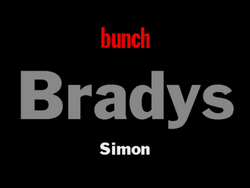