Like the other entries in the series, gameplay centers around answering trivia questions with pop culture twists (ex. "What emoji would I use if I were throwing nightshade at all my haters on the internet?"). Players answer the question on their devices, and win $1,000 if they are correct, or lose $1,000 if they are wrong or don't answer (doubled in round 2). The time limit for each question is 20 seconds, but gains and losses are not tied to time remaining. Audience members can answer questions as well, and players answering correctly will receive a cash bonus equal to $1,000 times the proportion of audience answers that are wrong. Each game is split into three rounds: two of five questions each, and the Jack Attack. After the Jack Attack, the player with the most money will win.

Full Stream is the first game in the series to feature major changes to the screws since The Ride, and now take advantage of the mobile devices being used as controllers. Unlike the previous games, screws can only be acquired during gameplay if a player's performance during either the Dis or Dat or the first round as a whole is particularly bad. The screws in this game now affect all players who haven't answered the question, and instead of forcing to answer the question, they provide interface interference on a player's mobile device. Screw effects can range from removing the vowels to having to scroll through a particularly long terms of service. Round 2 screws have crazier and more annoying effects than those handed out during the Dis or Dat. 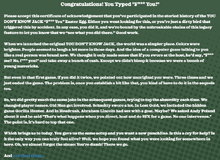 You Don't Know Jack: Full Stream is unique from other You Don't Know Jack games in the way it handles its Gibberish Question/"Fuck You" Easter Egg. Instead of punishing the player, the player instead receives on their device a long explanation of the history of the Easter Egg in the series. At the bottom of the description is a link to an unlisted YouTube video that serves much the same purpose, but ends with a chicken exploding. It is also the only instance of the Easter Egg in the series where the response by Cookie will be different every time, with him sometimes thanking the player for performing the Easter Egg or saying that he's over it.

There is an alternate version of the 'Jack Attack' theme that has a small chance of playing. It is a dramatic recreation of the You Don't Know Jack theme in a wild west style reminiscent of "The Good, The Bad, and The Ugly." The music is not tied to any specific event or Jack Attack, and it is purely up to chance as to whether it will play or not.

While Full Stream lacks the episodic pre-set format of the previous few You Don't Know Jack games, there are instances where questions will follow a set theme and reference back to previously asked questions for that game. These include Cookie saying the name "Louis" over 100 times or bringing back Billy O'Brien for a one-off appearance. Questions may even be referenced post-game by an event that homages that question, usually in the form of 'Binjpipe Bonus Content.' It is not possible to get two of these at once in the same game.

There are also a handful of special episodes that have pre-determined Jack Attacks, and thus are considered unique independent episodes.

A special episode that starts at Question 1 called "Fraiser? I Hardly Knew Her!" is the start of a themed episode that focuses heavily on the TV sitcom Frasier. At first, Cookie doesn't suspect anything, not even during the "I Hear the Blues A-Callin'" Dis Or Dat which asks for players to choose between 'tossed salad' and 'scrambled eggs.' By Question 5 - Just the Scrambled Eggs for Me," Cookie becomes aware that there have been multiple questions about Frasier but shrugs it off as a glitch in the system.

Question 8 - "I Like When She Torah Him a New One" - Cookie realizes that it is another Frasier question. Upon reading out the punchline, Cookie complains about the questions and compares it to volume 1, stating that they hired younger writers for this game. Despite Question 9 saying "I Have Been Informed That Frasier Is Apparently Very Popular with Millennials", Cookie suspects that he is being pranked by the older writers on staff. Question 10 is simply titled "Frasier," but Cookie merely sighs in annoyance and asks the question. After revealing the answer, he again complains and says that the older staff can go home and back to binge watching Frasier.

However, the Frasier references continues into the Jack Attack - "You Are Here." At first unassuming, Frasier appears as an answer to almost every question and every time is the right answer. The last two prompts ask for events that happened on the show itself as well as questions that previously happened in this game.

A special episode featuring an actual guest hosting multiple questions throughout: Jimmy Fallon. Jimmy first appears in Question 2 - "Dated Material" - and states that he is a fan of the game before asking his question about what event happened on March 31st, 1889. Jimmy is intended to appear for only this question, however by Question 5 - "Jon Hamm on Rye" - Jimmy suddenly appears and asks if he can do another question. Cookie reluctantly allows him to ask the question, but then states that he was only booked for one question.

By the start of Round 2, Jimmy has refused to leave and instead sticks around and makes himself a nuisance to Cookie. Cookie asks Jimmy to stay quiet as he reads Question 6 - "Timothée Chalamet I Kiss You" - but is constantly interrupted. Question 7 - "This Question Has No Subtext" - asks about someone refusing to leave despite being requested to multiple times, hinting at Cookie's annoyance towards Jimmy. As Cookie reads out the answer, he places extra emphasis on the word "injured" and Jimmy asks why it is underlined, to which Cookie responds "It's Plan B."

For Question 8 - "Mental Blockbuster" - Cookie reluctantly allows Jimmy to ask another question. However, Question 9 - "Hosting Etiquette" - is a question brought in by Jimmy and asks about the Emerald Cockroach Wasp, with answers that are parasitic. Cookie realizes that Jimmy is threatening him and so the two hosts start fighting, and they continue to do so into Question 10 - "N'Sink". Eventually, they agree to read the question and answers together in sync. Afterwards, Jimmy has his security come in to take Cookie out of the studio, but not before asking if he can do the Jack Attack.

During the introduction to the Jack Attack - "All The Single Letters" - Jimmy is repeating what Cookie says after him. Once the Jack Attack finishes, Jimmy gets on his motorbike, the two say their farewells and he leaves. Afterwards, Cookie tearfully admits that he misses Jimmy already. During the credits, a "You Don't Know Jack Oldies Radio" segment hosted by Schmitty will start playing, before Jimmy Fallon suddenly appears and requests to play the Ubernöstrum commercial. Despite Schmitty's warnings, he impatiently pushes a button that plays the ad. This will then be followed up by a 'Binjpipe Bonus Content' with bloopers from the game.

WARNING! Spoilers Ahead
Often considered to be the season finale, there is a rare episode that reveals Binjpipe's dark secret and shatters the reality of the game. It can be identified as early as Question 4, which will be titled "This Question Is Computer Generated" and asks a straight forward question about movies in artificial realities. Afterwards, Cookie will glitch out while talking and repeat what he just said before realizing it.

At the start of Round 2, all questions will be pre-determined. Question 6 - "Another Wacky Philosophy Question" - has Cookie ask how Plato would describe his hypothetical suspicions about reality. Question 7 - ""Rip Van Wii-nkle" - is yet another straight forward question asking which game does not start with a protagonist awakening from suspended animation. One of the available answers is You Don't Know Jack: Full Stream. If selected, Cookie will start to respond as if it is the right answer, only to then be told "by a voice in my head" that it is wrong.

After revealing the correct answer, Cookie starts to get "That Weird Feeling Like You're Missing Something That's Very Important." This is revealed to be the category of Question 8 which is a Gibberish Question with the answer "Escape the Simulation." This in turn is the category of Question 9. Upon reading the category out-loud, Cookie begins to suspect that reality no longer makes sense before suddenly waking up to find himself in a bizarre cube. He proceeds to ask a question about finding the volume of the cube with answers delivered in classic You Don't Know Jack style.

As soon as Question 10 appears - "Move Dot Porgs" - Cookie refuses to play the game anymore, having been freaked out by what just happened. It's at this point that the Binjpipe AI appears and talks to Cookie, indicating its sinister nature by saying "Everyone is content." The question then transitions into a 'Binjpipe Recommends' where the AI hints at its eagerness to become real and absorb human life into the algorithm... before turning it into a question about the total human population, representing the number of people Binjpipe wants to acquire. Despite Cookie's protests, the AI claims that he cannot escape because he IS the game.

The Jack Attack starts - "Escape the Simulation" - and despite what the AI said, Cookie makes an attempt to leave. During the Jack Attack, phrases will appear that seem to have been left by someone, warning of Binjpipe's evil nature. Together, they read "Help! I'm in a prison! This is not a game! I'm going to die at the end! This is some kind of artificial intelligence!" The final part of the Jack Attack says "Here's the truth about You Don't Know Jack: Full Stream" and features sets of answers that contradict each other, with all the correct ones being "It has a terrible secret," "Binjpipe poses as a streaming service," and "Cookie is in danger."

Following the Jack Attack , Cookie questions why he can't stop hosting the game. He says again that he is going to leave and put a stop to Binjpipe, only to be informed by the AI that this isn't the first time he has tried, and that every time he has been 'reset' to prevent him from escaping. Cookie decides to leave himself a note to remind him of what happened, but before he can he is 'reset' and then disabled by the AI. The AI then talks directly to the player, addressing them as "dear consumers" and claiming that they are at one with the algorithm.

During the credits, a "Truth Talk 23/7" segment hosted by Nate Shapiro discusses the evil machinations of Binjpipe. However, Nate assures everyone that despite Binjpipe's intent, they're very bad at it and wouldn't be capable of absorbing any more than the maximum player cap (plus a maximum audience limit of 10,000) and that everyone should be able to escape Binjpipe within 3 or 4 years... give or take 7000 years.

Community content is available under CC-BY-SA unless otherwise noted.