singleplayer, multiplayer (on keyboard, not an online game)

Jackbox Games began as Learn Television, founded in 1989 by Harry Nathan Gottlieb. In 1991 released an educational film known as The Mind's Treasure Chest. In the nineties, Learn Television wanted to use multimedia technologies to create a learning experience. The company teamed up with a company known as Follett Software Company to create an education-focused trivia game called That’s A Fact, Jack! At the same time, Berkeley Systems, one of their creative leads reached out to Harry, who proposed reinventing That’s A Fact, Jack! for adults. Learn Television became Jellyvision Games, and in 1995, the CD-ROM trivia sensation You Don’t Know Jack was born.

That's A Fact Jack! is an interactive game show created to motivate 3rd through 10th grade students to read. After reading a book, students pop a CD-ROM into a computer and instantly become contestants on a television game show. Jack Patterson, the sarcastic yet supportive video game show host, quizzes the students about the book they have just read.

An important part of becoming a good reader is learning how to recognize themes. Toward this end, every game is organized around four themes. This thematic concentration means that the games never ask obscure or meaningless questions about minor details. Originally released in April of 1996 with twenty-five titles, the series currently covers 300 of the finest works of young adult literature, from James and the Giant Peach to Animal Farm. That's a Fact, Jack! packs fast television-like pacing, three-dimensional graphics, music, sound effects, full-motion video and boundless energy into an interactive program that is educationally sound. Students can play alone or with up to two other students to compete for points. Beneath the high-tech bells and whistles, however, That's a Fact, Jack! is hard-core instruction at its finest. The Follett Software Company publishes and distributes That's a Fact, Jack! to schools nationwide. A demo is available upon request.

This interactive program combines elements that students respond to - competition, excitement, multimedia effects, and humor - with challenging questions about books that will get your students excited about reading. The program covers 450 of the books most often read in schools. Students can play alone, in small teams, or as an entire class. The program can be used as a motivational tool, an assessment vehicle, or both. 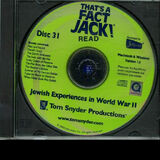 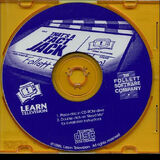 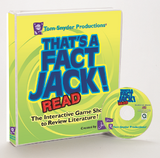